Wow!  What an unforgettable experience of a lifetime!

An absolutely stunning country, wonderfully friendly people (all English-speaking!), a fantastically organised race - all these things sum up to have resulted in an awesome adventure.  Superlatives are insufficient to describe what a high I'm on.  Having returned home to my family, I missed them terribly, I'm so incredibly happy to be back with them, and now the last week's amazing events are now slowly soaking in.

My only regret was not being able to spend more time with the other ultra cyclists, all of them fantastic people and riders, who came from all over Europe (Austria, Belgium, Bosnia, Croatia, France, Germany, Hungary, Italy, Serbia, Slovenia, and myself from the Brexiting-UK), with many of them being highly experienced, and who made the race exciting, pushing me hard to the line, snapping at my heels, including two former Race Across America (“RAAM”) finishers, three Transcontinental Race (“TCR”) entrants, and many former Mille Miglia and Paris-Brest-Paris ("PBP") competitors, all of whom made great efforts and whom I admire greatly for their ability to endure, physically and mentally, regardless of speed.  Fortunately, I managed to spend time with most of them before the race started, and with the faster finishers after, sharing experiences and getting to know them better.

Hard Cro - The Race
In summary, Hard Cro is an ultra-endurance, unsupported, solo race, 1,400km (880mi) around Croatia, with about 17,000m (55,000ft) climbing, from the southernmost point of Croatia, Prevlaka, up the stunning Dalmatian coast, to the westernmost point in fertile Istria, Savudrija (checkpoint 1), through the gorgeous hilly area to the northernmost point, Sveti Martin Na Mura (checkpoint 2), and to the easternmost point in Slavonia finishing by the beautiful Danube in Ilok.

My (Complete Lack Of A) Race Plan:
1. From the start, ride really hard at a stupid pace, overtaking 24 riders in 4 hours, as you haven't recovered from winning the 2,200km Giro 2 weeks previously, nor trained, have no idea how you feel so, screw it, just keep riding hard and hope you don't implode. 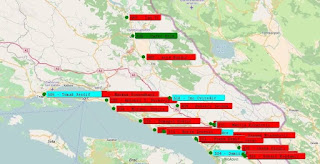 2. After 6 hours, implode, cramp, and find a magic fountain to wash and cool yourself, drink, and crack on, relieved that your stupidity in step 1 didn't finish your race. 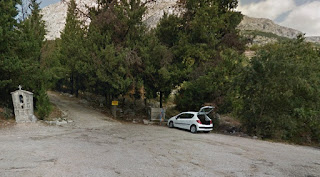 3. Ride through the night, climbing through wild inland areas where there are bears and wolves, knowing that your Lycra will provide zero protection from a sharp swipe/bite and that you're sure to be caught by those hungry wild animals whilst climbing at walking pace.
4. Descend through fog at 6 degrees Celsius, gathering ice on your fingerless gloves and arms.  Take off your glasses as they're useless with all the precipitation, then drop them somewhere on a 40mph descent.  Recover some heat by shivering, sat on a petrol station shop's floor, whilst eating cold sandwiches, to the blatantly contemptuous looks of the manager, tutting and shaking his head as he strides over, despising this inappropriately-dressed hobo.
5. Poison yourself with an overdose of electrolyte and carbonated drinks, make yourself feel so sick that you can't eat or drink for 8 hours.
6. On climbing Ucka, Croatia's tallest, steepest mountain (some sections 20%), injure your lower left back by overcompensating for your already-injured lower right back (from being runover by a car in April) so that you need to take painkillers, which will also help with that saddle sore which has returned from the Giro, because you didn't recover enough before doing this race.

7. Gingerly cross a non-existent road made up of loose stones and more stones, without a square of tarmac, praying to the god of cycling not to puncture nor fall off with a good dose of road rash.
8. Leisurely wash, eat and sleep at the first checkpoint until your rival riders catch up with you at checkpoint 1 and set off again while you're sleeping, annihilating your 2.5 hour lead, stressing all the time that you won't catch them again.  Hope that they'll fall asleep into a nice, soft ditch because, surely, they can't go without sleep for consecutive 2 nights.  You certainly can't.
9. Realise that you've made a wee navigation error - a road that you wanted to use as a shortcut is now a shortcut to death, as it has literally fallen down in large sections like steps, so you have to descend further and climb even more.
10. When riding through the second night, get so cold that you need to resort to buying work gloves from a petrol station and stuffing paper towels, from their toilet, up your jacket so you look pregnant. 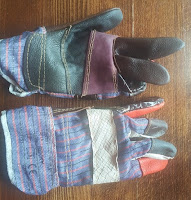 11. Repeat step 5.  Curse yourself for your double stupidity.
12. Lie down outside a supermarket, trying not to vomit on yourself anymore.  Set off again, feeling like you're about to fall asleep while riding.
13. Repeat step 11 but use the side of a busy road to power-nap, hoping that you won't get decapitated by a lorry but, screw it, you're too tired to care.
14. Find some chocolate milkshake in random shops, hoping to cure yourself from the stupidity of steps 5 and 11, ensuring that you lose more time to the other riders.
15. At checkpoint 2, eat leisurely, drink more milk with sugar, shower, then sleep for 45mins, enough time for your rivals to catch up with you, just as you're leaving.  Be inspired by the dot watchers along the route who cheer you on.
16. Get hit in the eye by a massive moth.  Break a spoke on your front wheel and struggle to rip it off satisfactorily.  Lose the top of your only AA powered USB charger before the race even started, discover in the pitch black that all your lights' batteries have run out or failed, then bodge a new bike light by using a weak 3xAA work light, secured to your aero bars with duct tape.

17. Start hallucinating again, seeing animals, people waving at you from cars and cafés, even a bear, where there are none, even while you're trying to stay awake by talking on the 'phone to your poor, suffering wife at 0300hrs, until your 'phone's battery also runs out.
18. Get lost when your Garmin's battery runs out, ride round in circles, unable to find the way to the hotel finishing point nor be able to remember its name, desperately hoping that your chasers won't catch up. 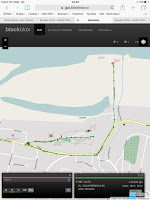 19. Eventually find your way to the finish line and collapse, relieved, after learning that you're first in, about 20 miles ahead of the next rider.  In spite of all the stupidity, the time is 67 hours and 5 minutes - the race is won. 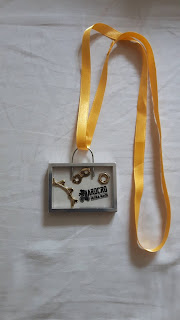 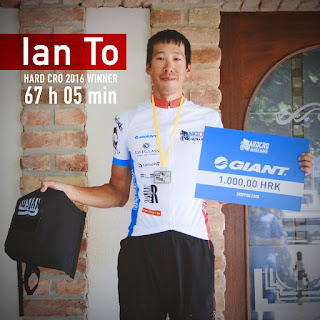 Time to relax with food, drink, and good company on the banks of the Danube. 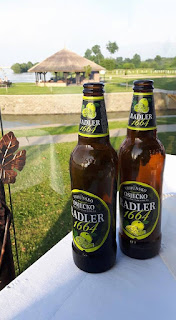